Running Across the Golden Gate Bridge 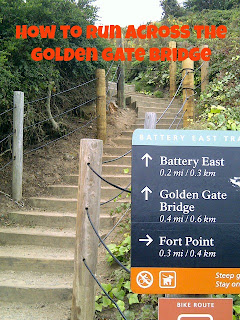 For me, running across the Golden Gate Bridge seemed like a bit of a pipe dream, akin to marrying a movie star for love or inheriting a designer shoe collection in your exact size--feasible, but highly unlikely.  It wasn't the physical challenge that made it seem difficult, but the logistical challenge.  For one, I live in Philadelphia, and San Francisco is a six-hour flight away.  Up until last week I'd never been anywhere north of LA on the West Coast, and my busy work schedule tends to make long trips more hassle than they're worth for a couple of days off.

Even when Mike and I planned our trip to San Francisco for a friend's wedding 2 hours south in Carmel, it still seemed unlikely.  Mike mentioned that he would like to spend one morning in California golfing, and I muttered something about running across the bridge, but that was it.

We drove down toward San Francisco on a Tuesday afternoon, stopping at Muir Woods, Tiburon, and Sausalito on the way.  When I first saw the bridge appear over the water in Tiburon off in the distance and shrouded with fog, I couldn't help but mutter, "Wow" and take a million fuzzy photos on my Blackberry.  When we drove over it a few hours later, I was sold.  I knew that I had to run it.

On Wednesday morning after stopping by the hotel Starbucks for a mocha latte and a banana, I visited the concierge desk to ask how to safely get to the park by the bridge.  He gave me a route that was over 16 miles, which seemed a bit ambitious on a trip where we had been awoken early every morning to people walking on squeaky floors above us or a Japanese business man making loud phone calls on speakerphone one room over.  I figured I could always take the long route back, but I wanted to get to the bridge in one piece.  I put my room key and a credit card in my pocket, grabbed my phone, and took a cab down to the Sports Basement in Presido by Crissy Field.  Crissy Field is that place where all of your Facebook friends take photos with the beach and bridge framed perfectly in the background.  It is not Golden Gate Park, which I may have found out the hard way... 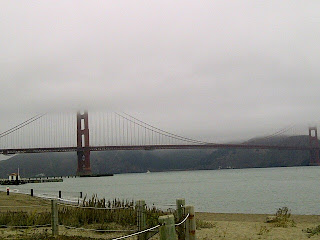 My nice cab driver Amos gave me his cell number in case I had a problem or got stuck somewhere.  Then I was off, first left down the dirt trail along the beach and Crissy Field, winding towards the bridge. It was so foggy that I couldn't see the tops of the towers--even from a couple of hundred yards away. 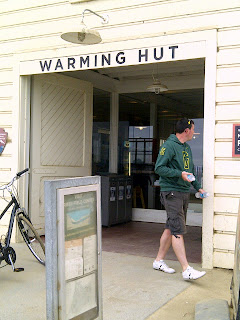 I passed the Warming House, buzzing with chilly tourists ordering hot coffee and pastries, then followed signs up winding steps on my left, up the hill to Battery East and the bridge. 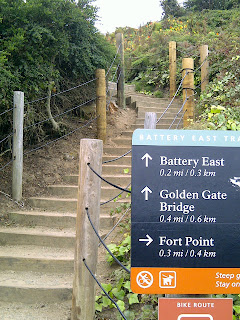 It was misty and foggy and gray, and I was so eager to get on the bridge that I started out way too fast and was huffing and puffing by the time I got to the top of the steps.  It probably didn't help that I was wearing four layers in an attempt to stay warm through the high winds on the span of the bridge.  (Apparently the bridge can sway up to 27.7 feet!)

At the top of the steps I bared to the right, winding on more dirt paths, then pavement with white paint dividing bike lanes from pedestrians.  It got a little hairy there, with me waving my arms at bikers who were so drawn in by the view that they weren't looking where they were going.  I passed the Bridge Round House and stayed to the right, and shortly there after I was on the bridge.  The path is on the right side of the bridge if you're coming from the San Francisco side, and is divided into a bike lane and a pedestrian lane.  (Why the man walking has to be Amish, I have no idea.) 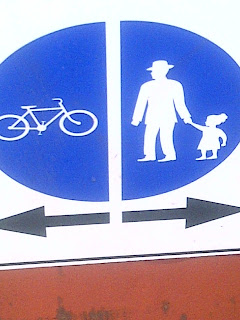 The beginning of the path is dotted with yellow phones for suicide hotline counselors and slightly creepy signs that say, "Don't do it."  It's like an anti-Nike ad.  Maybe they should just mention that there are Great White sharks down there?

The signature orange railing only goes about waist height and there are openings between each rail that could totally mess with your head if you thought about it for too long.  There were some construction crews doing paint touch ups and replacing light bulbs along the way and bikers were instructed to walk their bikes through these stretches, although none of them actually did.  I had a nice police officer take my picture as proof.  (Please note what the wind has done to my hair, and the obvious fact that I'm not wearing any makeup.) 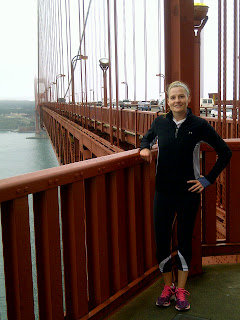 The traffic was loud and a few logging trucks went by and blew some dust in my eyes, but they never felt too close for comfort.  The only thing that really made me nervous was the bikers, some looking like they were ready for the Tour de France with clip in pedals and technical jerseys on, others on bicycles with baskets and cameras weighing down their necks looking over the bridge with their mouths gaping open.  Because the bike and pedestrian lanes are the same back and forth (pedestrians on the right, bikers on the left) when bikes pass, they veer into the pedestrian lane.  I was a little worried that an absent-mided biker might run me into the railing or off the path and into the road. 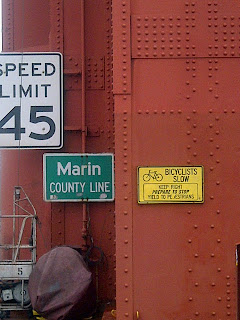 The bridge is 1.1 miles each way, with a few areas for outlooks over bay and out toward Alcatraz.  When you get to Marin County the other side, there is an outlook area on Marin County called Vista Point with a parking lot and restrooms, and a bunch of tourists taking pictures in front of giant photos of the bridge on a clear day, so they can fake their perfect moment. 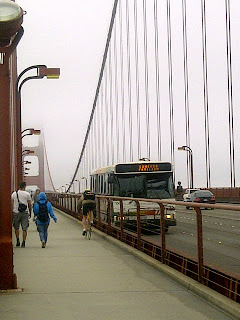 From there you can turn around and go back the way you came, or head up the trails of Tiburon.  I chose to turn around, run back, and savor my victory by continuing on from there off to Ghirardelli Square, Fisherman's Wharf, Pier 39, and up Market Street back to our hotel. 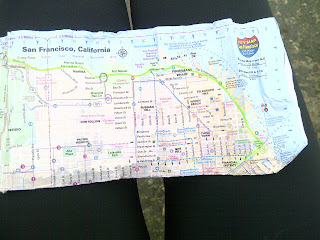 Including the bridge both ways, the run ended up being about 11 miles.  It was easily the highlight of my trip, and one of the most empowering things I've done in a long time.  Best of all, I only had to pay for the cab ride!  I would highly recommend the experience to any runners visiting the San Francisco area.  The views are spectacular, and while the fog does usually burn off around 12:30 p.m., the crowds are much smaller in the morning which makes the bridge easier to navigate, and also makes you feel a little more like a rockstar for doing it!  Dress warmly, bring a camera, and enjoy!