10 Things About Pregnancy I Wish I'd Known Earlier

I was really lucky with my pregnancy for the most part, but there are a few things that I wish I had known earlier, either because they would have kept me from worrying so much, or because they would have helped things go a little more smoothly for me!  Obviously everyone is different, but hopefully some of this information will be helpful to  you as well.

1) You might not start showing (or needing maternity clothes) for a pretty long time!
Everyone is different (and many things including your height, genetics, whether this is your first pregnancy, and dumb luck can determine when you show) but I didn't end up needing to wear maternity clothes until I was towards the end of my second trimester.  Of course a lot of my clothes didn't fit before then, but pants that sat lower on the waist and longer tops and sweaters were mostly fine.  It also took me a pretty long time to really start showing, even though I felt like I was growing a ton.  Don't feel like you automatically need to go out and spend hundreds of dollars on maternity clothes the second you get pregnant, or become instantly paranoid that everyone knows you're expecting when you're only 9 weeks and you're not ready to tell people yet!

2) You won't have all of the terrible symptoms you read in What to Expect When You're Expecting.
You might have some, even a lot, but you won't have them all.  I think everything I knew about pregnancy symptoms I learned from chick flicks and sitcoms.  I assumed I would fall asleep under my desk a la Miranda in Sex and the City and throw up on strangers like Kathrine Heigl in Knocked Up.  Coworkers kept telling me that, "My body would do really mean things to me," and that I would soon experience incontinence.  Yes, seriously.  Fortunately, none of those things happened to me... although there were definitely some times that I could have fallen asleep under my desk.

3) Just because you have a symptom one day it doesn't mean that you will have that symptom for the rest of your pregnancy.
I can't tell you how many times I had a pregnancy symptom and immediately panicked that I would have to feel that way for the rest of my pregnancy, whether that be the next 32 weeks or the next 2 weeks.  I had a couple of days when I was so tired I literally passed out on the living room or bedroom floor without any intention of taking a nap.  I was worried that I would be that tired forever.  I started dealing with a lot of pelvic pain (especially when side stepping or getting up after lying down) and was afraid that it would only get worse.  In truth, some days I felt lousy but woke up the next day feeling perfectly fine.

4) A lot of days, you might not feel that different.
Many days when I woke up I'd forget for a split second that I was pregnant.  I could still do most physical things that I could do before, I just felt like I had a big belly doing them.

5) Exercise support belts are awesome (even if they look a little embarrassing).
By the time I was 7 months pregnant, I noticed that a long walk could give me a really achy pelvis and make walking the next day really painful. When I was running I felt like I needed a sports bra for my belly.  This support belt really helped me.  It did make me look like a had a bit of a beer belly, but I often wore it over a tank top and under a t-shirt or sweatshirt so it wasn't visible. 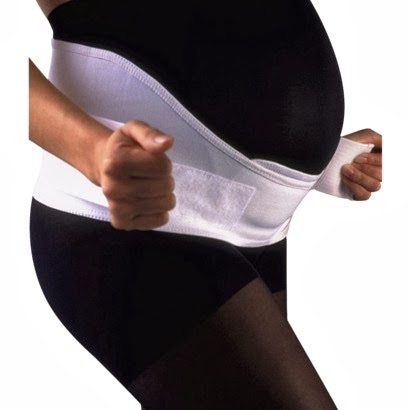 6) You may not need to buy a lot of the maternity clothes out there...
Of course this depends on luck, your frame, and your fashion choices, but sweatshirts, sweatpants, t-shirts, shorts, and pjs may all be fine.  If it has elastic and can go under your bump, you're probably good to go!  Maybe you can save that money for a pedicure or a prenatal massage...

7) Exercise will really make you feel better.
I started having pelvic pain around 7 months and it was awful.  At first I avoided exercise to see if it went away, but I quickly found that stretching and the right exercise seemed to make it much better.  Tracy Anderson's Prenatal Workout DVDs (especially months 7 and 8) and the elliptical made a big difference for me.

8) You really don't need that many more calories.
See here.  I know.  Bummer.  During the first trimester it's barely any more at all, during the second trimester it's around 300 calories, and by the end of your pregnancy it's around 500 calories.  That means an apple would be plenty in month 2, a Greek Yogurt with a tbsp of peanut butter as an afternoon snack would be plenty to fill your extra calorie quota in your 5th month, and in your 8th month you could hit it with a bagel and cream cheese.

9) The things you really miss might not be the things you think you'd miss.
I thought I'd miss coffee and wine.  I was the girl who would save Keurig in a fire long before I'd pull out my shoes or ceramic elephant collection.  A nice glass of wine felt like a reward for a long day or the thing that made a dinner out feel like a special occasion.  In reality, I didn't miss either THAT much.  What I really missed was sleeping on my back and my stomach, having weekly doctors appointments where I was weighed and had to pee in a cup, running without issue, and having my body be my own.

10) It will fly by.
During the first trimester, especially when we were waiting to tell friends and family, it seemed like my pregnancy would take FOREVER.  When my due date came and went, it seemed like my suspicions were confirmed.  Now I'm sitting here with an 11-week old wondering where the time went!
Posted by Jocelyn at 11:47 AM