A year ago, I wrote a novel.  I used No Plot, No Problem by Chris Baty, which is an awesome book designed to help weenies like me get out of their own way and write 50,000 words in 30 days.  The idea is that when you're writing that many words that quickly, there isn't time to second guess yourself. You can't agonize over every word for so long that you completely psych yourself out and decide that you should go clean your car, paint your toenails, or watch Sleepless in Seattle for the 100th time instead.
Somehow Baty understood my problem--that even though writing a novel was the thing that I wanted to do most in the world, I could never get myself to actually sit down and do it.  The task just seemed too overwhelming to start on--and that is coming from a girl who has run three marathons.  I needed a plan and an end point.  Just as I could't run 26.2 miles when I started training, I couldn't sit down and write a novel in one shot.  I needed small, attainable goals.  I needed baby steps.  I couldn't write a novel, but I could write 2,000 words a day. 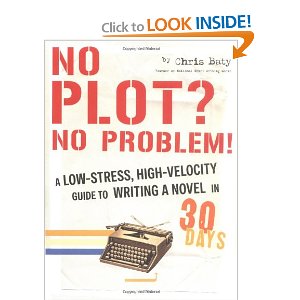 The process was fun.  Most of the time, I could write without even thinking.  It was almost like magic.  The words would fly out of my fingers and for an hour or two a day, I lived in the world of my book.  I didn't have to worry about where it was all going, it all just came together on its own.  Sometimes the plot twists even surprised me.
When the month was over I had 65,000 words, including a beginning, a middle, and an end.  I felt inspired.  I felt like I had finally taken the steps to go after what I really wanted.  I wanted to go out and try new things, because nothing seemed as scary.
Since then, my novel has sat in a manilla envelope on the desk in our office gathering dust.  I've made a couple of half-hearted attempts to edit it, but I've never really gotten anywhere.  I've never pitched it to any literary agents.  I've never let anyone read it.  It's almost like it never even existed.
Why is it that going after the thing that you want most--whether it is a relationship, or a job, or finishing a triathlon, or owning your own home--is the most terrifying thing?  It's like if you get rejected from something that you don't care that much about it's not that big a deal, because you can tell yourself that you never really wanted it anyway, but if you fail at the thing you really want, then you're just a failure.  You are nothing.
Maybe I need a Baty book on how to edit your novel in 30 days.  Maybe I need to just get over myself and start pitching it.  At least if I fail, I can say I tried because I'd rather be a failure than a weenie.

Email ThisBlogThis!Share to TwitterShare to FacebookShare to Pinterest
Labels: book, chris baty, edit, Failure, getting out of your own way, getting published, literary agent, no plot, no problem, weenie, write your first novel, writing